As the old year is slowly coming to an end, some of us find this a good time to stop for a moment and think a bit about our previous year's journey. Where it took us. What it gave to us. What it took away.
And then we tend to make wishes and resolutions for the coming year, focussing on things that really matter to us. Things we perhaps haven't dedicated as much time as we would have liked to. Things that make our lives beautiful and ours. Things that fulfill us.
Check out the selection of 12 student poster reminders of Things that really matter in life. 12 reminders for the 12 months of the coming new year. ;-)
The posters have been created by autumn 2010 VSS group within the Listen to the Walls Talking project.

I wish you lots of time for enjoying things that matter to YOU in this coming year. Have wonderful holidays and a happy new year!
Posted by Saša at 3:23 PM 11 comments:

What was designed as a short and simple 2 month project back in France turned out quite a challenge to carry out as planned. In October there were strikes all over France, soon after autumn vacations followed in Slovenia – it seemed that when we were at school the French partners weren't and the other way round. Then came the winter break in December and slightly before it our English class had ended. It turned out we really didn't have much time for playing.
Despite the hiccups our group mostly managed to realize the tasks set. These are some of our thoughts at the end:
It's good to connect with similarly aged students from a different country – it makes using English much more real. Students from our group generally liked the project idea, found it interesting and meaningful although not everybody managed to establish contact with a partner student.
It would have been nice, some said, if there had been more opportunities for interaction and more time devoted to a closer collaboration. Also - it would have been great if all Slovene and French students participated seriously and were quick in posting replies. eTwinning site could use some improving; simple little things like recognizing urls and hyperlinking them automatically would be nice.
As a teacher I think our participation in this project nicely showed in practice the importance of the impression you make online with your intro, creativity and responsiveness. Others judge you by what you show them. Being open, reliable and active can take you further - or at least shows a better picture ;-). Different people always view things differently – which good! We should be respectful of others and others of us.
Posted by Saša at 1:27 PM No comments:

Get creative - reuse and respect

Step 3 in our eTwinning experiment involves poster creation - showing things that matter or should matter in life using:

Why using Listen to the walls talking images?

Because we have already been active in Listen to the Walls Talking project. We contributed over 70 new graffiti photos to the pool which now has over 900 photos from 20 different countries that are licensed with a CC license which allows reuse.:-)

Re-using these photos in our motivational posters nicely builds upon the work of others, promotes the spirit of sharing and makes the style of motivational posters coherent while it at the same time allows us to choose from a wide range of topics or upload and share graffiti of our own.

When using photos of other walls talking contributors, we credited them by a discretely written author's name + wallstalking.org or www.flickr.com/groups/wallstalking on the motivator. Text was simply added on images using Picasa.

This is what we came up with:


Nice, aren't they? We shared them with our French partners on our Twinspace - when they upload theirs, we'll vote for the best one.
Posted by Saša at 10:59 AM No comments:

When checking out our French partner's avatars and descriptions on our shared Twinspace, these struck some of us as a bit intimidating – but then we had a look at ours (previous post) and saw we don't look much different either. :-)

So – what does this tell us? First impression counts. People who don't know you judge you by what you tell them. So - it's definitely worth thinking before posting our intros and photos online. Things we find funny may be misunderstood by somebody else. 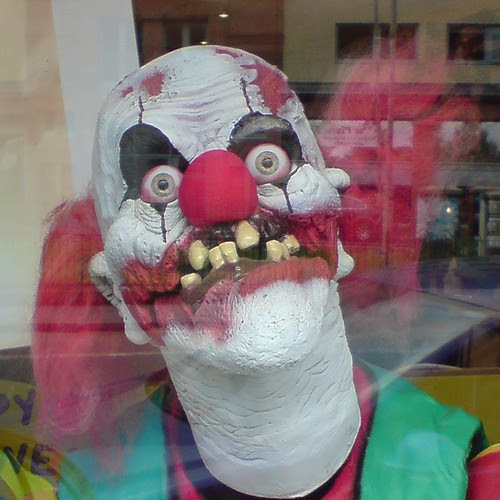 We wrote to the French and shared a thing or two obout our neck of the woods on their walls; about our home town Nova Gorica and The Solkan bridge; about the majestic The Postojna Cave - and a popular party place called Ambasada Gavioli; about Pipistrel light aircrafts and Planica ski jump center - the Slovene cradle of ski-jumping and ski-flying.
Posted by Saša at 10:29 AM No comments:

This autumn we will try to connect with the French students and learn a thing or two about France.
The first things that seem to come to our mind in connection with this lovely country not so far away from us are Paris and Eiffel tower, cheese, wine, perfumes, fashion, skiing slopes, French classes at school (a funny language with complicated pronunciation ;-)), the Petzl climbing equipment, the Citroen car manufecturer, the Disneyland park, and famous people like President Sarkozy, the actor Jean Reno, the rally driver Sebastien Loeb and the prankster Remi Gaillard.
What does our informatics group look like? Meet our South Park avatars created in phase 1 of our eTwinning Things that matter project using SP Studio. 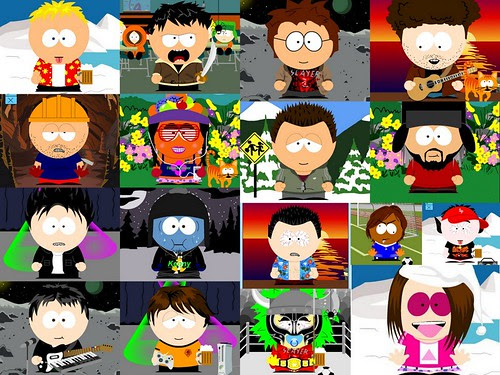 Nice, aren't we?
And this is our mechatronics group. 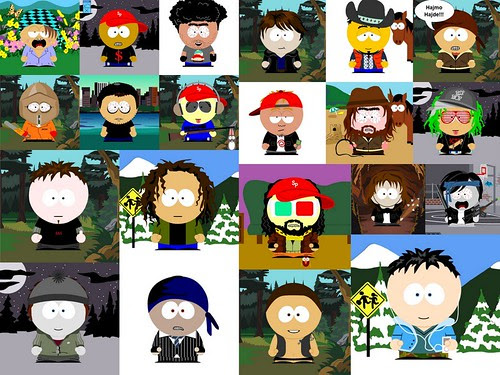 There are all sorts of faces staring from walls


and all sorts of opinions

School and love and city life at Walls Talking

some that have to do with love (one way or another ;-))

and some that deal with city life

You are most welcome to check out also parts 1 and 2 of this post and share your thoughts. :-)
Posted by Saša at 7:48 AM No comments: